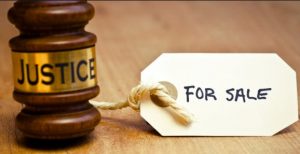 A CULTURE OF JUDICIAL ARROGANCE AND CORRUPTION

“Bankruptcy court corruption is not just a matter of bankruptcy trustees in collusion with corrupt bankruptcy judges. The corruption is supported, and justice hindered by high ranking officials in the United States Trustee Program. The corruption has advanced to punishing any and all who mention the criminal acts of trustees and organized crime operating through the United States Bankruptcy Courts. As though greed is not enough, the trustees, in collusion with others, intentionally go forth to destroy lives. Exemptions provided by law are denied debtors. Cases are intentionally, and unreasonably kept open for years. Parties in cases are sanctioned to discourage them from pursuing justice. Contempt of court powers are misused to coerce litigants into agreeing with extortion demands. This does not ensure integrity and restore public confidence.”

“Our courts should not be collection agencies for crooks.”

“The American public, victimized and held hostage by bankruptcy court corruption, have no where to turn.”

Now, can this really be emphasized enough? The Attorney General of the United States of America, has gone on the public record as stating that there are:

“If experience demands a presumption that a judge will seize every opportunity presented to him in the course of his official conduct to line his pockets, no canon of ethics or statute regarding disqualification can save our judicial system.”—Justice William Rehnquist

Petition To STOP JUDICIAL CORRUPTION IN OUR BANKRUPTCY COURTS

(A Gross Misstatement of Fact.!!!)

Judge Stewart M Bernstein: “I conclude that Lefkowitz has carried his burden of showing that his decision to continue the Debtor’s occupancy of the Property was both fair and reasonable. The Property was valuable and the Debtor’s Contract rights were a significant asset. While in the hands of Helen-May, the Property had deteriorated and further deterioration threatened to reduce its value.”

WHAT CONTRACT RIGHTS? Not only were any purported contract rights based on a major fraud, (and a non-existent entity) but they were terminated with the pre-filing issuance of a false instrument. (a bad check!) The fact is that the property was not under the control of the owner/creditor; it was under the control of the debtor/defendant, the trustee, the court and the debtor’s congregation! That is when the deterioration of the property occurred. (Attorney Letter To Judge Re: Damages.) Judge Stewart M. Bernstein failed to acknowledge that the court itself prohibited the owners (us!) from even inspecting the property during the defendant’s outrageous “rent free” four years of occupancy enforced by bankruptcy stay.

Judge Stewart M Bernstein also ignored the existence of pictures, video and sworn statements as to the pristine condition of the property at the time that the debtor/defendants entered into a contract to purchase the property. (Subsequently, the debtor/defendants entered into an occupancy agreement until such time as they would close on the purchase of the property.) The terms of the agreement expressly forbid any alterations to the property whatsoever! Yet, the debtor arrogantly ignored no fewer than seven letters from the owner’s attorney ordering them to cease and desist their demolition, destruction and vandalism of the property. An inspection was finally permitted by the court, however, and as the foregoing “statement of facts” reflects that the court once again chose to ignore the evidence thus gathered-link. (Conference Denial re damages-link)

“protecting the Debtor’s asset and future development plans. Although many of these expenditures also benefitted the camp, they maintained and enhanced the value of the Debtor’s investment. Furthermore, there was a substantial question, at least until the end of February 2007, whether the Debtor would ever have to pay the accruing Adequate Protection Payments, and the Debtor was still challenging the order denying the settlement’s enforcement as late as July 31, 2007, the end of the period covered by the Judgment. Hence, the decision to continue to occupy the Property through July 2007 was fair and reasonable when made, and the Trustee has not sustained his burden of ultimate persuasion that Lefkowitz breached his fiduciary duty in deciding to continue the Debtor’s occupancy.”

“Protecting The Debtor’s Asset?” When did our property become the debtor’s asset? Which legally executed document conveyed our property to the debtor? Answer: None! There were no legally executed documents by these debtor/criminals. This was not the debtor’s asset.  What a convolution of facts, semantics and logic. Furthermore, as provided for by law, did the trustee ever approve any expenditures on the property? Did the trustee witness such expenditures on the property? The debtor claimed to have spent $2,000,000.00 in improvements to the property…unauthorized by the trustee. Did the trustee ever witness said improvements? Why is it that the property appraised for considerably less after the debtors supposed $2,000,000.00 of improvements and four year occupancy, than it did at the time of their initial occupancy in June of 2004? Together, the trustee and our attorneys witnessed first hand the destruction left behind by this debtor/defendant. A subsequent letter was written to Judge Bernstein and pictures were made available to him.

Judge Bernstein’s “finding of fact” goes on to state: “Occupancy permitted Lefkowitz to spend substantial funds of his own to upgrade the infrastructure of the Property,”

The occupancy agreement expressly forbid any and all alterations whatsoever to the property barring written permission from the owner, Helen-May Holdings, LLC (Irene Griffin sole member) who, through her attorney sent seven letters demanding that the debtor/occupier “cease and desist” what amounted to demolition and destruction of our property! The debtor/defendant was clearly paving his way for his future development plans for our property…Before he owned the property!

The debtor/defendant has demonstrated a complete lack of respect for the court while the court bows to the debtor’s superior arrogance. Evidently, court orders are meaningless. As we know and “the facts” firmly reflect; the debtor/defendant lived defiantly and rent-free on our property for nearly four years. As to the debtor challenging the order declaring an unauthorized settlement, the decision was reaffirmed in an appeals court. Illogically, Judge Bernstein has stated: that while they were litigating and appealing this issue, (nearly six years by the time of his “Finding of Facts”) and while they remained on our property under the guise of a bankruptcy stay, the question was “whether the debtor would ever have to pay the accruing Adequate Protection Payment” Use & Occupancy, Lis Pendens, Contract Violations, Fraud, Damages, Etc.! With the assistance of the court and in an obvious strategy designed to deplete the creditor’s ability to survive their onslaught of frivolous and fraudulent litigation, the debtor/defendant has continued to kick the can down the road.

We are left with the impression that we were simply prey for the beast and carrion for the marauding scavengers. They made certain that they had picked the carcass clean before they swept the scat out of the door. After forty-two years of marriage, entrepreneurial endeavors and hard work, we have been depleted of everything…including our home, our savings and our investment property. Making matters even worse, the mortgage lender on the property is a close business associate of the debtors and a member of the same religious community that has mounted a biased, scorched earth campaign against me and my wife. We are being sued by the lender for two million dollars. ($2,000,000.00)

Hiding behind corporate law is bad enough, but hiding a non-existent entity behind a corporate veil is criminal fraud! There’s nobody there! Voila. An “Immaculate Deception.” Our very first response filing to Judge Cornelius Blackshear, ten years ago stated, “This entity does not exist as filed!” We sought a declaratory judgment to determine their identity and to lift the bankruptcy stay since they did not legally exist. We were denied! The debtor filed yet another fraudulent notice of bankruptcy and the court turned a blind eye. The court had an obligation Under The Law and yet, the courts knowingly allowed the bankruptcy case to proceed for ten years and even rendered determinations in favor of this non-existent entity! This “non-existent entity” has remained immune to “The Fruit of the Poisoned Tree” while it devours “The Fruits Of Our Labors!” Absolutely masterful! Seemingly, the fruit continues to grow sweeter for this debtor/defendant. 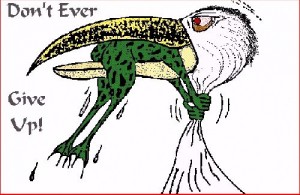 The funeral of President J.F. Kennedy and where I was that day.

31 thoughts on “JUDICIAL CORRUPTION IN OUR BANKRUPTCY COURTS”